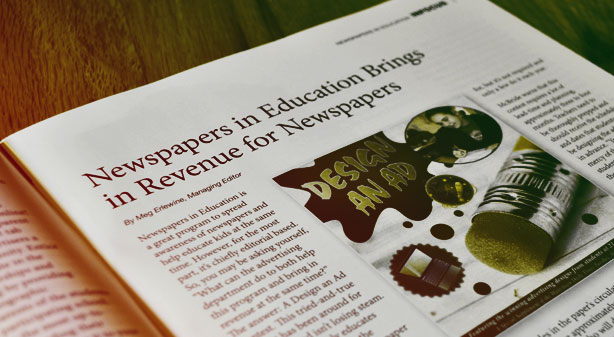 Newspapers in Education is a great program to spread awareness of newspapers and help educate kids at the same time. However, for the most part, it’s chiefly editorial based. So, you may be asking yourself, “What can the advertising department do to both help this program and bring in revenue at the same time?” The answer: A Design an Ad Contest. This tried-and-true contest has been around for decades, and isn’t losing steam. It simultaneously educates K-12 graders about the newspaper — and newspaper advertising, in particular — and offers new advertising opportunities. Local businesses love this contest because it spreads goodwill throughout the community, with their names attached to it. I recently spoke to the Watertown Daily Times’ NIE coordinator Dawn McBride about her experience with the Design an Ad special section, which the paper has been running for 24 years.

At the Daily Times, McBride works with the display advertising department, though this could easily be incorporated to classified or any sales department. The sales reps approach local businesses with an agreement to purchase at least one space in the special section, and offer a reduced rate for the second or third ad they purchase. Meanwhile, McBride offers the contest to the teachers of the fourth through 12th grades in the paper’s circulation area. “We have approximately 900 students in 45 classes who will design ads from the previously sold advertisers, who provide general info about their business,” McBride explained. After recruiting teachers to participate, McBride and her ad manager Judy Kluetzman host short training sessions for teachers to familiarize themselves with the contest. The teachers receive 10 newspapers for three Mondays in a row to help them teach an advertising unit. They also receive a booklet with four weeks of timelines to keep them on track. As for the students, they are given the logo and contact information, but the rest is left up to their imagination. McBride said that they are encouraged to call or stop by the business they are designing an ad for, but it’s not required and only a few do it each year.

McBride warns that this contest requires a lot of lead-time and planning, approximately three to four months. Teachers need to be thoroughly prepped and should receive the schedule and dates that students will be designing the ads months in advance. “You are at the mercy of the teachers and students who agree to design the ad,” McBride reminds. “We make sure the teachers know they are making a firm commitment. If they say 50 students are designing ads, we need to receive at least close to 50 ads returned to us. Three years ago we had schools closing because a mass number of students were ill from the flu. This happened during February, the month students were supposed to be designing the ads. We had to extend the deadline to the schools and crunch the production time closer together because the number of ads received was down by 1/3 of what we expected. We plan it so each advertiser receives approximately 10 ads.”

After the student-designed ads are returned to the paper, McBride sorts them by advertiser and returns them to the reps that sold them. They then have two weeks to show the students’ designs to the advertisers. The advertisers then select the ad or ads they will sponsor in the newspaper. The Daily Times assembles six to eight employees from all different departments to do the final judging. McBride believes that because the judges are from various departments within the newspaper, there is a wide cross-section of what is perceived as a good ad. The ads are judged against the others in the same age group (four to seven; seven to nine; and 10 to 12), and are further divided between hand drawn and computer designed. “We look at the overall design for eye appeal,” McBride said. “Is it a unique or clever way to promote the business? Is all the information spelled correctly and are all the elements the advertiser provided included in the ad?”

Once the Daily Times staff has selected the winners of the contest, they award Chamber of Commerce gift certificates to the first and second place winners in each category. The winners receive $40 and $20 for first and second place, respectively. The teacher of the first-place winner also receives a prize — a $25 check to purchase art supplies or a needed item for the classroom. The check is made out to the school to reimburse the teacher after the purchase is made.

But the real winner is the newspaper. McBride said that last year the paper received an additional $5,400 in revenue, with 81 advertisers participating. The program sees continued support through the local businesses — she said that a majority of the advertisers return year after year. In 2011, of the said 81 advertisers, only 12 were new. “It is a highly read section and creates a lot of buzz from our readers,” McBride explained. “When you are dealing with children, it increases your chance of single-copy sales from parents, grandparents and other relatives.” While this profit goes directly to the advertising department, McBride says that the NIE benefits from the goodwill the program generates with the paper’s readers and school districts.

If you’re considering implementing a Design an Ad special section in your paper, McBride urges you to plan ahead, “the first year will be the hardest, as with all new projects.” Again, she suggests papers create a complete timeline from beginning to end. “Ours starts in December with sending the information to the schools and ends when it is printed in early April.” This could be a very popular — and profitable — addition to your newspaper. Several years ago the Daily Times decided to drop the contest, fearing that it had run its course, however, businesses noticed immediately and it was reinstated. Even after 24 years, they continue to tweak it a little each year to stay current or to fix a new problem that came up the previous year. McBride also suggests borrowing what has worked from other newspapers and adjust it to make it your own. “This year I borrowed an idea from the Daily American in Somerset, Pa. They offer a theme and writing prompts for every grade level from K-12. The students are asked to submit writing entries based on a theme ‘Newspapers are a treasure.’ Using the prompt given, such as ‘One man’s trash is another man’s treasure’ for the fourth through sixth grades, they were asked to look in the classified ads to see what people are trying to get rid of. Clip one ad and attach it to their paper. Then write a narrative telling why they would treasure that item. The Daily American runs the writing submissions as a contest and only features the best in each category. We will do it as a feature of ‘good creative writing’ and run it in the center of the Design an Ad special section. Every year we do feature creative writing, but thought this year we would change it up a bit by offering the themed writing prompts. We won’t know until March if it is a hit or a miss.”