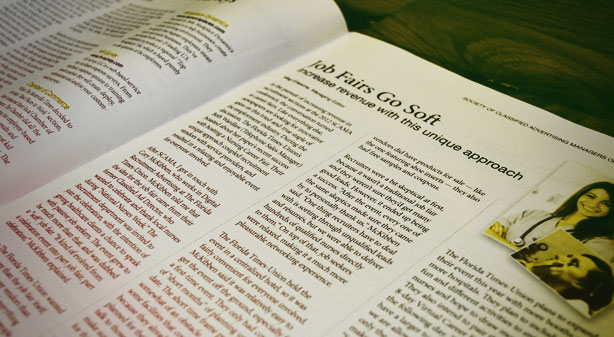 In the pursuit of increasing revenue in recruitment sections at the 2012 SCAMA conference, the conversation turned to career fairs. Like everything else, newspapers are looking for innovative spins on this tried-and-true staple of the employment industry. During the discussion, The Florida Times-Union’s Beth Wardlaw (Telephone Sales Manager) boasted about her paper’s recent success with hosting a Nursing Career Fair. Their unique approach coupled recruitment vendors with service providers, and resulted in a relaxing and enjoyable event for everyone involved.

After SCAMA, I got in touch with Cory McKibben, who works in Digital Recruitment Advertising at The Florida Times-Union. McKibben told me that the idea for the job fair came from their former Classified Ad Director, who wanted to celebrate and thank local nurses during “National Nurses Week.” The Recruitment department was invited to join the celebration, with the intention of giving healthcare clients a chance to speak with passive job seekers. The event grew to be much more than that, and was dubbed a “soft” job fair. “It kind of evolved from a celebration event into part job fair, part celebration,” McKibben explained.

Because The Florida Times-Union wanted to focus on more than the job fair itself, organizers invited more vendors than hospitals. Booths included everything from a shoe store with inserts for people on their feet all day to a Healthcare Credit Union to a uniform shop. It also had prizes and giveaways, as well activities for nurses to attend. Nurses could receive massages, makeovers, even haircuts and styling, all free of charge. While some vendors did have products for sale — like the one featuring shoe inserts — they also had free samples and coupons.

Recruiters were a bit skeptical at first, because it wasn’t a traditional job fair and they weren’t sure they’d get many good leads. However, it ended up being a success. “After the event, every one of the same skeptics made sure they came by to personally thank us,” McKibben said. “One thing recruiters have to deal with is sorting through unqualified leads and résumés, but we were able to deliver hundreds of qualified nurses directly to them.” On top of that, job seekers were relaxed, making it a much more pleasurable networking experience.

The Florida Times-Union held the event in a centralized hotel, so it was fairly convenient for everyone involved. McKibben said it was relatively easy to get the event off the ground, especially for a first-time event. They only had couple of “short months” of planning until the date. The short time frame proved to be somewhat of an obstacle, as there were some facilities that could not participate because they already had something planned for their staff. “We were able to talk to those who couldn’t make it and make sure they had us on their calendar for this year,” McKibben added.

This “soft” job fair was an unmitigated success for all involved. “The event generated thousands of dollars in additional revenue for our department and paper,” McKibben said. “But I think the fact that it went so well and the feedback was so great, we are expecting that number to double this year, if not more.”

The Florida Times-Union plans to expand their event this year with more booths and more hospitals. They plan to include more fun and different activities to entertain the nurses and hope to draw more attendees. They also intend to pair the event with an 8-day Virtual Career Fair that will begin the following day. “We are expecting to have a larger turnout on this event because we are allowing clients to participate in only the online portion if they cannot make the event,” McKibben explained. “Some hospitals and healthcare properties can’t send HR staff due to a variety of reasons. This will allow them to still get qualified leads.”

If you’re considering hosting a “soft” job fair, McKibben advises to plan early, get the word out there to the healthcare community. “I would also let the facilities know how the soft job fair works and is actually very beneficial for them because they aren’t getting inundated with unqualified applicants, McKibben added. “Like I mentioned before, I think that because everything went rather seamlessly, we will be able to grow the event each year and can make it a must to attend each year.”